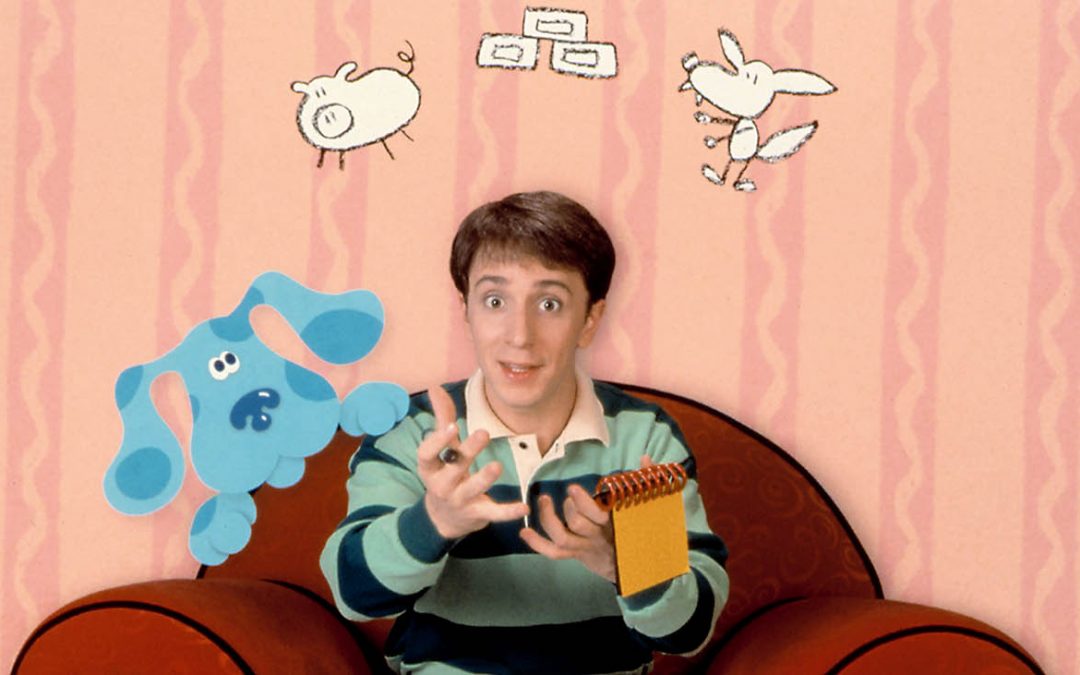 Blue’s Clues is my first baby. It premiered in September 1996 and is still going strong.  I spearheaded this project from start to finish.  I had no idea what I was getting into – I just knew that I wanted to teach a million kids at a time …and television was a way to do just that.  Blue’s Clues started out as a “game show for preschoolers”.  What that meant to me was that I could get kids playing the games and learning skills that they need for kindergarten.  We ask kids questions, through Steve, and then WAIT for them to answer us back.  Everyone thought we were crazy …. But it was the start of the entire “interactive preschool television” generation.

What is it About?:  Blue’s Clues is an interactive “game show” where live action host Steve (and later his pretend brother, Joe) live with a preschool animated puppy named Blue.  They play Blue’s Clues to figure out what Blue wants by finding three blue pawprints and sitting in the Thinking Chair when they find them to figure it out.  Along the way, Blue, Steve and the home viewers “help” their animated friends by playing thinking games based on skills preschoolers need to know to do well in Kindergarten.

Stats:  We created 165 episodes which air on Nick Jr in the States and on stations all around the world. Blue’s Big Musical Movie – full length feature – the movie is awesome and the songs are so good. Blue’s Clues books, 2 live shows which still travel and Blue’s Clues toys.

KIDS ARE LEARNING FROM BLUE’S CLUES!:  One of our biggest accomplishments with the show was the Blue Balloon in the Macys Day Parade (just kidding!) it was the research from Dr. Jennings Bryant from University of Alabama who proved that kids who watched Blue’s Clues scored better on standardized tests than kids who did not watch the show.  Kids were learning kindergarten readiness skills – colors, shapes, numbers, matching, sorting, letters, pre-reading skills, and critical thinking skills.  Kids did not just learn what was on the show, but the strategies we taught them were used to help them master concepts on their own.  Success!