The Music Behind Daniel Tiger’s Neighborhood

by Angela Santomero | Behind the Scenes, Daniel Tiger's Neighborhood 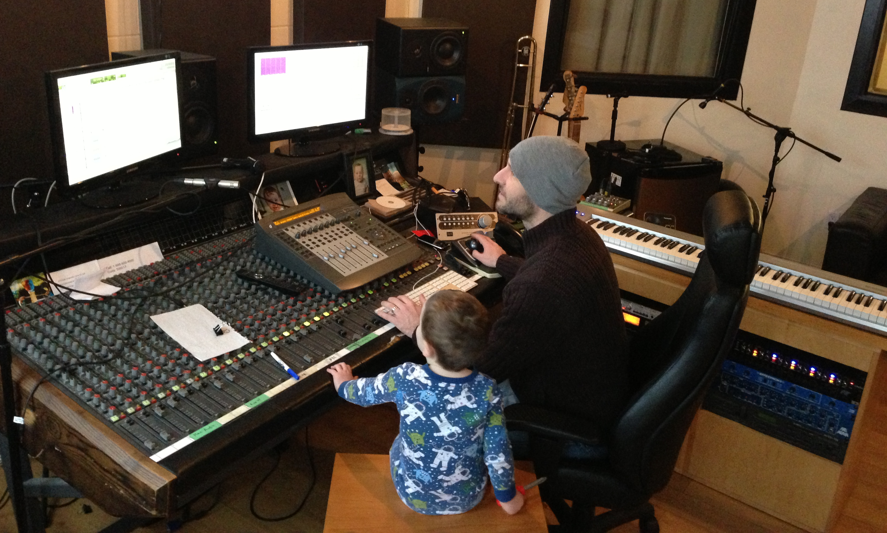 Can’t get the Daniel Tiger’s Neighborhood songs out of your head??

Meet the rock stars that you can thank!

The crew at Voodoo Highway Music & Post are among my favorite people. They “get it” when we say we want a song to sound “pop-ish”, and I want parents to love it as much as kids, & then I give them a “research approved” strategy to work with..Of course, they have been ultra creative & have pushed the boundaries of traditional preschool music to create award winning songs (if I do say so myself) that are hip enough to make it onto my phone…

This week, we’re giving you a behind the scenes peek at the way the music comes together for Daniel Tiger’s Neighborhood which was created to be a new type of “preschool musical”.  Meet the composers at Voodoo Highway Music, James Chapple, Graeme Cornies, Dave Kelly, Brian Pickett & so many more that  bring  the music and tone to life.   We’re so happy that James Chapple can answer some questions about the musical process.

Can you explain a bit about your process of composing & sound editing?

There are 2 components to writing music for Daniel Tiger’s Neighborhood: 1) the featured songs in each episode (an Imagination Song & a Strategy Song), & 2) the underscore (background music that plays throughout the episode). Before we even write a single note for 1 of the songs, we read over the script for that episode. This helps us understand exactly what the songs should be about, the style in which they should be written, and of course the message that the episode is trying to convey.

Once we have a firm understanding of what the core message of the episode should be, we write a “demo” for each song & revise based on feedback from the producers. We then record all of the talented cast singing. It is a unique process for us because, on most other shows, the music is composed after the animation is completed. 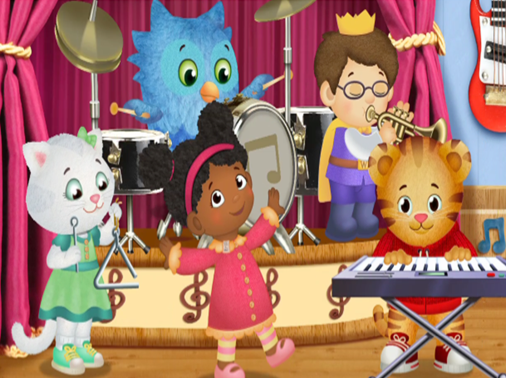 For Daniel, we write the songs before the animation has even begun, which allows the animators to make the visuals match up with our music. This helps the songs look & sound  fantastic in the final episode! The underscore portion of the show is completed in a more traditional method. We get a copy of the episode once the animation is nearly complete. While we watch through, we make notes about how the music should reflect the action on screen. This process is called “spotting”. Once we spot the episode, we get to the fun part: composing the music! We work hard to help accentuate the emotions of the characters on screen, & ultimately it’s quite rewarding when we watch through the final episode & see how much our music helps tell the story!

Of all the (many!) songs you’ve composed for the series, can you pick 1 favorite?

Every song is unique & memorable, but my personal favorite would be the updated version of Fred’s song “It’s You I Like”. On that particular song, it was my job to learn the piano parts so Graeme would be able to add other instruments & vocals over top. It was a real challenge to figure out, as I didn’t have any sheet music & had to learn it all by ear from a recording of Fred singing. It was a moment where I felt very connected to Mister Rogers.

What was the most emotional moment for you while working on the show?

For me personally it was when we received the wonderful fan mail from parents across the country. We compose all the music in our studio, sometimes late at night, & it’s easy to become disconnected from the show’s audience. Seeing how our music has affected so many different people, in so many positive ways, was a really meaningful moment for me as a composer. When I started out to write music for a living, I had the hopes of being able to change lives the way music changed my own. To hear all of the wonderful things people have said about our music on Daniel Tiger’s Neighborhood, well, it is simply the reason I got into this career in the first place.

Also, I should note, the moment my mother called me up in tears after watching the first episode was a beautiful moment as well. It really meant a lot to hear how proud she was of our work!

One of my favorites is the potty song – it still cracks me up & I can’t wait to hear my nephews sing it!

I often find myself chuckling when we have to record funny characters that appear in the imagination songs. Recording the talented (& hilarious) voice actors pretending to be fish, knives, forks, superheroes, stuffed animals, flowers, or any other of the myriad of interesting characters always leaves me laughing.

The music just keeps getting better and better!  Any episodes that are particularly special to you?

Well, the music for episode 31 (“Neighbor Day”), is simply out of this world. It’s a very music-heavy episode & we’ve written a lot of cool songs that incorporate many different characters singing. I think we are all very proud of that episode, as we went above & beyond what we normally compose.

Thanks for the incredible work James!!