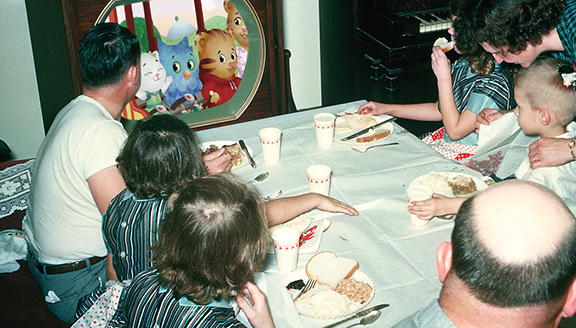 We love hearing from Daniel Tiger’s Neighborhood fans and many parents have been reporting that the strategies featured in each episode are not just helpful for their preschoolers, but also useful tools in their adult lives! References to the original Mister Rogers’ Neighborhood series draw parents to the Daniel Tiger series as much as their toddlers. Whether parents remember the original “Daniel Striped Tiger” puppet that Fred held in his show, or have a special place in their hearts for the original red trolley (Ding! Ding!), there are little nods to Fred’s series throughout Daniel’s animated Neighborhood of Make-Believe. This affinity by parents is likely to lead to greater occurrences of co-viewing.

It is our hope that these co-viewing habits spark conversations about Daniel’s struggles and triumphs around the dinner table, before bed or anywhere it’s helpful.

According to Demers et al. (2012), “infant television viewing is greatly impacted by co-viewing, in that infants’ gaze and attention directly follows that of their parents.” Children put greater emphasis on content that their parents pay attention to. One positive consequence of this is that young children, mimicking the viewing behavior of their caregivers, will start to pick up on salient cues – a skill that is useful both with television viewing (higher comprehension of the episodes), and with other aspects of everyday life (picking out salient cues in our everyday environments, while ignoring distractions).

Not only is immediate viewing behavior (eyes on screen) affected by parental influence but, more importantly, off-screen time is also affected. Parents who co-view programs can then incorporate the lessons and themes from the episodes into their child’s daily routines. When this “take away” message is incorporated and applied to the child’s real world surroundings, that’s when the benefits of quality content really shine!

So pull up a seat, you might be surprised what quality content (in appropriate amounts) can do for everyone!